What Is Heat Pipe?

A heat pipe is a two phase heat transfer device with a very high effective thermal conductivity. It is a vacuum tight device consisting of an envelope, a working fluid, and a wick structure. As shown in Figure 1, the heat input vaporizes the liquid working fluid inside the wick in the evaporator section. The saturated vapor, carrying the latent heat of vaporization, flows towards the colder condenser section. In the condenser, the vapor condenses and gives up its latent heat. The condensed liquid returns to the evaporator through the wick structure by capillary action. The phase change processes and two- phase flow circulation continue as long as the temperature gradient between the evaporator and condenser are maintained. 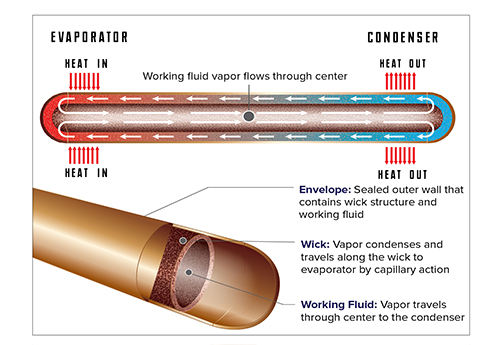 The capillary forces are dependent on the pore size of the wick, and the radii of curvature of the interface. The smaller the pore size, the tighter the radii of curvature, and hence the higher the capillary pressure that can be achieved. However, the capillary flow at a given pressure drop is highest when the pores are large, so there’s a tradeoff in wick design. See Wick Properties for a definition of the different wick properties, and how they are measured. 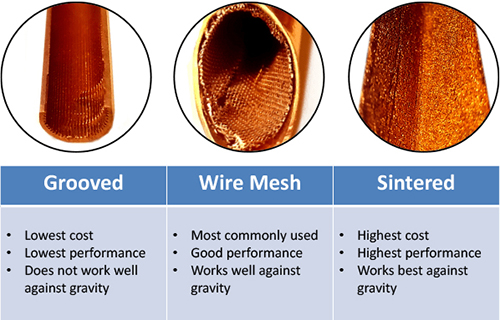 Grooved - Low Cost, does not work well against gravity